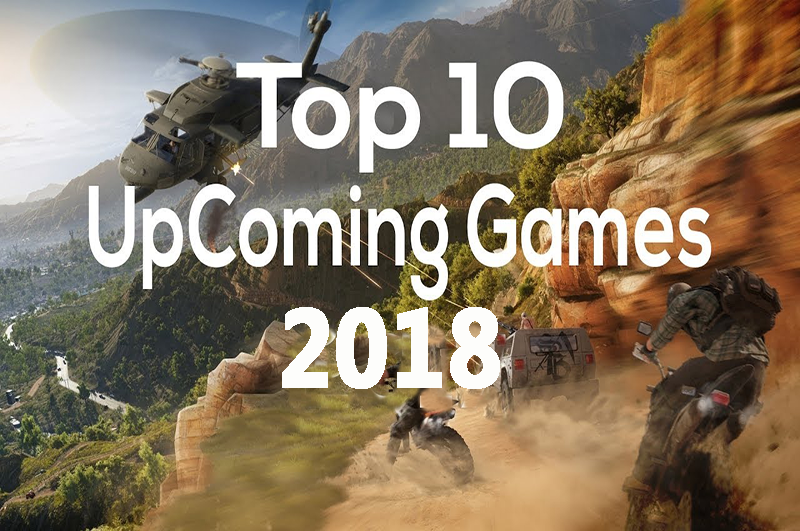 Who doesn’t love to play games? When the games are on consoles and PC, the enjoyment of gaming increases more than 1000 times! In the year of 2018, there are a number of awesome games awaiting release for all platforms. It’s really hard to contain all the excitement around them.

For gamers, the year 2018 is going to be full of fun and breathtaking. Here, I’ve listed all the exciting games that are about to blow your mind!

There’s hardly anyone who hasn’t heard the name of the legendary “Metal Gear” saga. Since the starting to the end, the story of Solid Snake, Big Boss, Gray Fox, and Raiden – all characters chilled all of us pretty much. It was really heartbreaking with the ending of “Metal Gear Solid V: The Phantom Pain”.

Feeling sad, right? Don’t you worry – Metal Gear is back with “Metal Gear: Survive”. The game takes place in the universe of Metal Gear. Unfortunately, no original “Metal Gear” characters will be in here. The environment takes place in a zombie apocalypse. You’ll have to survive as far as possible. Build your base, protect it from zombies, raid others – all interactions are awesome with all the crafting abilities.

Metal Gear: Survive will be available for PlayStation 4, Xbox One and Windows PC.

Multiplayer is really one of the best genres for any gamer. Facing off enemies, competitors from all over the world, fighting back with strategy & ferocity and conquering the world – all the breathtaking moments are surely enjoyable.

If you’re a multiplayer freak, Sea of Thieves is going to be a blast! The battleground is set into the vast, open seas where you, as a pirate, have to hunt down others, solve riddles, own hidden treasures and become the GREATEST of all! In the world of action, your blood will start to boil: arrrgh, chaaaarge!

Sea of Thieves is going to entertain us on Xbox One (also compatible with Xbox One X) and Windows 10 PCs. Keep an eye on Sea of Thieves.

FPS (First Person Shooting) is truly a testimonial of a player’s skill. However, that won’t be enough in Far Cry 5. The upcoming sequel of super-hit Far Cry 4 will start shooting into the Wild West.

In the Hope Country, Montana, fight your way to free your land from the infamous, bloodthirsty doomsday cult – Eden’s Gate and liberate your people from their dominion. Tired of shooting all the enemies all by yourself? No need to worry. The storyline is playable in both solo and multiplayer. Call in your friends, get reinforcements and fight your way to the victory!

Developed by Ubisoft, Far Cry 5 will be available on PS4, Xbox One, and Windows PC. Take a look at the Far Cry 5.

Dragon Ball is one of my most favorite cartoons in the world. With top-class actions and mind-boggling storyline, Dragon Ball has surely gained a big fan community. No one can resist the attraction of endless & spectacular fighting of all-powerful heroes – Goku, Gohan, Frieza, Piccolo, Vegeta and all others!

The hand-to-hand combat is back! Dragon Ball Fighter Z is a 2.5D fighting game developed by Arc System Works & published by Bandai Namco Entertainment. For enjoying the action, the game is available in the most popular gaming consoles – PS4 and Xbox One. Unfortunately, no PC version available.

In the hack-n-slash genre, I’m yet to find out any other game that can beat this classic, action-packed adventure RPG – God of War!

The classic story of God of War takes place in the Greek mythology where Kratos, the ghost of Sparta, starts his journey to take his revenge on the Gods of Olympus. The entire storyline is full of thrill, action and some good puzzles that took me hours to solve.

The latest release of God of War saga is now going to take place in the Nordic mythology, the time when monsters and gods roamed the earth. Many God of War fans is slightly disappointed to see the change.

Kratos is still same Sparta with the warrior’s spirit. Additionally, he’s a father now. He, along with his son, Atreus, embarks on an exciting, challenging & electrifying journey on the world. Kratos’s appearance has changed. However, the fighting style, courage, and mentality still match the classic Kratos – the God of War.

Like all the other God of War series, it’ll be available on PS4. Check out God of War.

Into this open world multiplayer, you’re on a venture to explore the futuristic land of the earth in Anthem, a shared-world action RPG. A vast world full of amazing tech and forgotten treasures filled with savage beasts are waiting for you.

In the open world, you’re in a role of a Freelancer, warriors to unravel world’s greatest mysteries and fight against forces who plan to erase humanity from the planet. Up to 4 Freelancers can band together and work as a team. Shared danger ensures shared glory. Every successful Freelancer will be awarded for every successful exploit. The stunning graphics with ultra-rich details will surely grab yourself into the world of future.

Anthem will be available for players on Windows, PS4 and Xbox One. Check out Anthem.

Darksiders is one of my most favorite series to play. The game is a third person hack-n-slash with creative puzzles. Sometimes, those puzzles are so infuriating!

In Darksiders 3, you play as Fury, one of the Four Horsemen of Apocalypse. Fury is the Rider of the Black Horse, depending on her magic and whip to restore the balance between good and evil. Numerous additional weapons will be available throughout the gameplay.

The entire story of Darksiders takes place after a great apocalypse that wiped out humanity. Demons ravage the world, and angels fight them in a never-ending battlefield. The Horsemen are the only hope to restore the balance. This sequel is coming out pretty late. However, depending on the gameplay, storyline, and action, it’s worth the fun.

Into a futuristic world, you’re a super-cop in Crackdown 3, hunting down the criminals using your awesome powers and smash places in the process. Powered by Unreal Engine, the entire open world is designed to give you a pure experience of sci-fi feel and top-notch action.

In this multiplayer online game, co-op with 3 of your friends, fly from one building to another, fire all the high-tech bazooka missiles on the poor enemies and bring out the dominant victory for your team. This cool multiplayer game will be available for Xbox One and Windows 10.

This is a superb remastered version of Shadow of the Colossus. It’s one of the best games for the creativity. The storyline focuses on a young adventurer who must defeat a horde of giant monsters and ancient beasts for saving his loved one. The art design, story beats, the world setting and boss battles are one of its own class.

Available on PS3, PS4, and PS4 Pro, this game will put the ultimate challenge of your mind and gaming skill for sure.

Check out the stunning graphics and open-world map with Shadow of the Colossus.

Zombies have been creeping into the world of games for a very long time. If you’re a zombie slayer, you definitely want to grab the upcoming blood bursting “Overkill’s The Walking Dead”. Developed by, you guessed it, Overkill Software, the game will be coming on PS4, Xbox One, and Windows PC.

Now, you go on a co-op journey with your 3 allies (4 in total) to hunt down all the notorious zombies. You have to fight with both the dead and living. You’re set into a post-apocalyptic world where your survival can only be ensured by silent & intense combats. Every playable character owns a unique skill tree, storyline but team battle is paramount.

Let’s combat in The Walking Dead!

I just can’t wait for all the thrills and actions! All these games are going to be added to my playing list for sure. What about you? Feel free to share your opinion and your favorite game in the comment section. Keep your fingers crossed and get your head tossed with the overwhelming experiences!