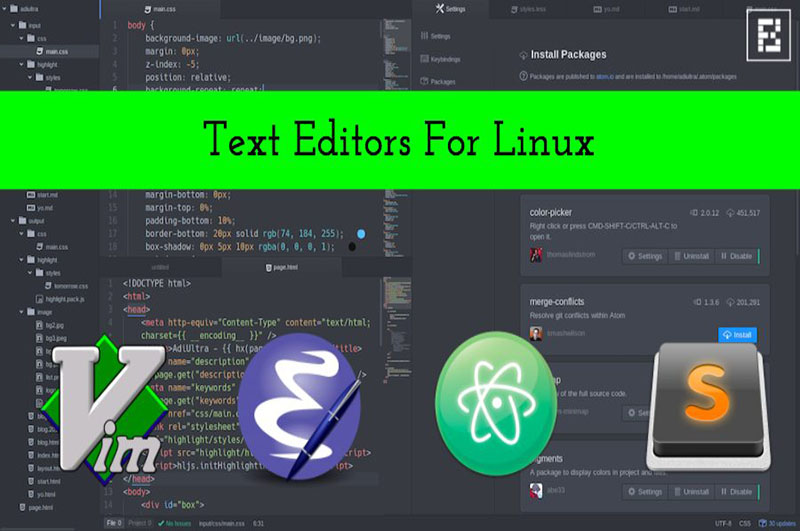 The term editor is generally used to refer to a text editor, which is software that allows users to create or manipulate plain text computer files. They are often used in the field of computer programming.  Not many people talk about portable apps but they’re a fine invention. The ability to open any program on any PC without the need to install it is extremely handy, especially if you do a lot of traveling for work and find yourself bouncing from one computer to another. In this tutorial, we will go over some of the top free text editors available on Linux systems to take with you from simple text and e-book editing and lot more. Vim is an advanced text editor. The name vim is a contraction of VI and Improved. So Vim is VI Improved. VI is a text editor that was originally created for the UNIX operating system. VI is actually short for visual and started out as the visual mode for the even older EX-line editor. Vim has replaced VI on most modern systems. Vim is a powerful text editor! Atom is a free and open source text editor created by the people at GitHub. It is available on Linux, Mac, and Windows. Atom is a highly configurable text editor and I will say just as highly configurable as sublime text, GNU Emacs, and Vim text editors which have been around for over 20 years. As originally created in 2014, so it’s one of the newer arrivals in the IDE scene and it is constantly being updated. It’s at heart a text editor but it can do a lot more. It’s modern, approachable, yet hackable to a core tool. The greatest asset of Atom is its plug-in system. There are literally thousands of plugins available that can really supercharge the editor. Sublime text is a cross-platform code editor. It’s been around since 2008 and was created by John Skinner. It supports several programming languages and frameworks that you expect. It has auto-completion, text highlighting, snippets, and third-party plugins. I’ve seen a lot of high-level developers work in sublime because it is such a great text editor. it is fast and you can use it basically for free although you do have a nag screen every now and then, it’s well worth paying the $70 for a full copy. Brackets is an open source text/code editor built for the web. It is actually on GitHub if you want to start downloading the code right now. So the first important thing to note about brackets is that it is actually built with JavaScript, HTML, and CSS. So it is built for web standard developers, it is made for web standard developers. If you have the skills to work in brackets or to use brackets, you also have the skills to hack on brackets to extend and customize it. It is an open source project and MIT license. So that means very little restrictions on what you can do with the code. Emacs is amongst one of the eldest and most flexible text/code editors obtainable for UNIX-based systems and Linux. It’s been around for almost two decades now and is well-documented for its potent and abundant editing components. Emacs is also beyond just an editor; it can be tailored and expanded with various “modes”, allowing it to be utilized similar to an IDE for computer programming languages such as Python, Java, and C.

That sums up this list of our top picks for the best free text editors available on Linux and other platforms as well.