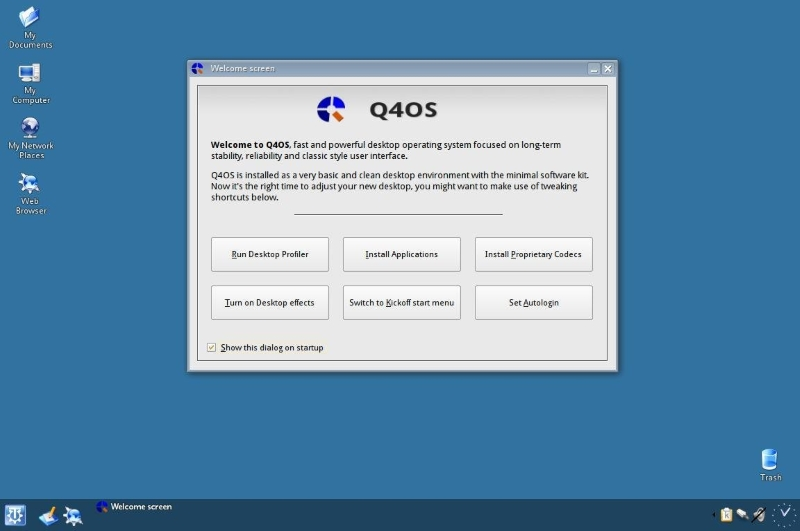 Linux is one of the best operating systems in the world. The system is lightweight, fast and resource efficient, ensuring compatibility with almost all the hardware and software. However, Linux is always a terrible experience for Windows users (except the brave & intelligent ones), especially when they jump from Windows for the first time. For them, a new Linux distro is available – Q4OS. The interface is designed especially for the Windows users who are going to use Linux for the first time.

But keep in mind that the primary target of Q4OS isn’t the casual/general users. With the powerful system interface (highly modified Trinity Desktop) quite similar to Windows XP/7, their target is the businesses/enterprises that are looking for an alternative to Windows while having the same interface and power. As you know, Windows XP, 7, 8 & 8.1 is obsolete now. Microsoft discontinued the mainstream support for these OS, which means they’re obsolete and will be supported via Extended Support program (not Windows XP). Businesses adapted to those operating systems and Q4OS targets to be the dominant part there.

However, this shouldn’t (and must not) prevent general users from having the feeling of this powerful and beautiful distro. Get Q4OS today!

The first and most important feature of Q4OS is the interface. In a word, it’s splendid. As a Windows user, I must admit – it’s very assuring. The system complexity of Linux is huge, and switching from Windows isn’t as easy as it sounds.

Now, the Linux features. Q4OS is based on Debian, the same base as Ubuntu. Ubuntu is one of the most popular Linux distros, ensuring that almost all the popular software is available without any trouble. Moreover, all the popular commands are usable.

The built-in software packages are pretty much everything you need for your everyday life, but those are relatively old version. To stay safe, you must update all the software. Here’s the list of installed major programs.

If you’re an experienced Linux user, prepare to get shocked. It’s a bit disappointing to see such a critical issue. When you install any software from the package manager (Synaptic Package Manager), it asks for the root password. But when running any command with “sudo”, for example, “sudo apt-get install firefox”, it won’t ask for the password!

In the attempt to make Q4OS more like Windows, the developers made this modification. Moreover, Windows users are more likely to install software from the GUI tool instead of the command line. That doesn’t make sense. If you’re interested in Q4OS or using it now, please fix this issue (or feature?) now. I also recommend taking a backup of the file before making the modification.

Now, the “sudo” from the terminal will ask for a password.

It’s a nice Linux distro in my opinion and I believe that others will find it very interesting. Whether you’re a Windows user or a master Linux user, don’t forget to try out Q4OS.