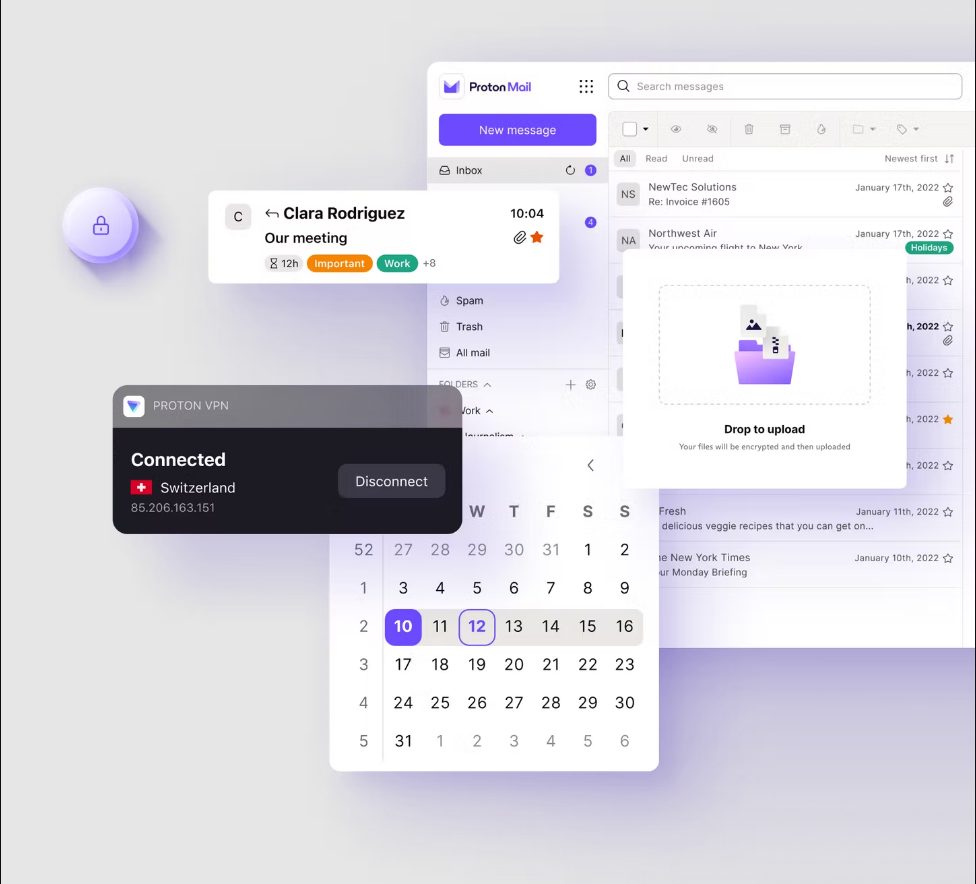 Hello! The well-known Swiss privacy startup ProtonMail is changing its name. Indeed, it wants to go beyond its famous encrypted email service. So, now the company is called Proton, and offers a whole privacy ecosystem. With this in mind, it groups together the available products: Proton Mail, Proton VPN, Proton Calendar and Proton Drive. From now on, they will be part of a global solution that users will be able to purchase together or in parts. Read on to learn more about the evolution from ProtonMail to Proton.

Until now, Proton offered its services separately. As a result, one of the objectives of this rebranding is to create this new ecosystem with privacy as a defining characteristic.

A renewed and elegant interface

All these tools share a unified interface. So, it is easy and intuitive to use them both through the browser and through native applications on our PC or laptop and on our mobile.

These services can continue to be contracted independently with their respective monthly fees. In fact, there is a free plan that allows us to use all these services in a more limited way. However, if you want to take advantage of all the potential, there are combined plans that are also interesting at an economic level.

A change with people in mind.

Xataka.com colleagues spoke with Bart Butler, CTO of Proton. With them, he shared the reasons for the new changes. Mainly regarding the change of name and strategy. As we mentioned previously, the company took this path thinking about people. They believe that people want an ecosystem, beyond individual products.

On the other hand, privacy remains the absolute center of the whole strategy. However, this privacy and end-to-end encryption are not entirely identical to that offered by WhatsApp, for example. E-mail is different, it’s based on PGP, Butler says. Furthermore, he emphasizes that PGP is a proven and constantly evolving technology. However, the most important thing is that it is interoperable, and this allows it to work between different systems.

There is another key element to Proton’s proposal. We are talking about usability. Indeed, it is essential to make a product as secure as possible. However, it is just as important to know how to use it easily. Therefore, it is not necessary for the user to know what encryption is. It is enough to know that it is there and that you can use it effortlessly and without any disadvantage.

Other serious concerns relate to privacy. In June 2013, Edward Snowden uncovered a terrible reality in which the NSA’s massive spying was blatant. This set off alarm bells and triggered more than ever the debate about privacy and how to protect it. However, almost a decade later, the forecasts are not encouraging.

Scandals of this kind surrounding large companies such as Google or Facebook are a constant occurrence. However, the vast majority of users end up using their products. Most of all because they work well, they allow sharing everything and, above all, they are free.

According to Butler, there is no problem sharing content via Instagram or Facebook. The privacy issue is to control who sees your data and in what context. Therefore, people value that control more than they do. Consequently, many people would be willing to switch providers. That is, if they get a service that provides them the same as Google, but with data control, then they would adopt it.

It’s no secret that Google profits from its users’ data. Actually, as Butler says: Google’s customers are not its users, but advertisers. On the other hand, Proton aims to make money while preserving the privacy of users. In other words, customers are willing to pay to safeguard their data. In other words, they have suffered so many data breaches that they would be willing to pay a company to preserve it. That’s to say, Proton is betting on a different business model. So clear is their commitment to privacy, that not even they have access to our data. In addition, they are committed to open source. Therefore, people can be part of the project and monitor how it evolves. Bye!